For generations, ham curing had been a seasonal event for Virginia farmers. Hogs were killed in the winter and their meat packed in salt while the weather was cool enough to keep it from spoiling. The meat then was rinsed and hung to dry and smoke during the remaining cool months. With luck, it would endure the high temperatures of summer to age. In 1926, S. Wallace Edwards, the young captain of the Jamestown-Surry ferry, began selling ham sandwiches to his passengers. The ham had been cured by him as on the family farm according to those time-tested methods. Soon demand became great enough that Edwards was curing hams on a full-time basis. To this day, S. Wallace Edwards & Sons remains a family operation in Surry County not far from Jamestown. Today’s facilities simulate the seasons without sacrificing the care and attention that result in that unique flavor of Virginia hams.

Country Hams are the quintessential dish of The South.  A traditional favorite of true country ham lovers. Dry salt-cured, slow-smoked over a smoldering hickory, and aged a minimum of 3 months. The result: Rich mahogany color and distinct country ham flavor. 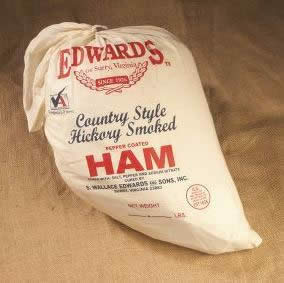 Storage: Requires no refrigeration prior to cooking. For peak flavor, prepare within 2 months of purchase. Store by hanging in cool, dry place. If stored longer, ham will continue to dry and become more intensely flavored.

Preparation: Mold on skin of an aged ham is natural and harmless. Remove by washing with hot water and stiff brush. Can be soaked in hot water overnight to remove salt. If you soak your ham, be sure to change water before cooking.

Carving: The flavor of aged hams is enhanced by carving into very thin slices. (Thick slices can cause overpowering flavor intensity.) Using a sharp knife, make your first cut on the glazed side of the ham, at hock (small) end. Cut consecutive slices on a 45 degree angle, straight to the bone, keeping slices as thin as possible.
Traditional Method: After washing & soaking, place ham in large pan and fully submerge in cold water. Bring water to slow SIMMER (not boil) and maintain for 20-25 minutes per pound (e.g., approximately 5 hours for 12 lb. ham) & or until meat thermometer shows internal temperature of 160 degrees F. Add water as needed to keep ham covered. When fully cooked, remove ham from pan and, while still warm, remove skin & trim fat to 1/4-inch thickness. Glaze ham, if desired.

Baking: After washing the ham cook the ham in a low oven in a covered roasting pan with just a quart of water or after washing and soaking the ham you can pour 5 cups of water over ham, place lid firmly on pan and place in pre-heated oven at 500 degrees F. After 15 minutes, turn off oven. DO NOT OPEN OVEN. In 3 hours, re-heat oven to 500 degrees F., bake for 15 minutes  and turn off oven again. (DO NOT OPEN.) Leave ham in oven overnight, or until oven is completely cool. Finally, take ham out of pan, remove skin & trim fat to 1/4-inch thickness. Glaze ham, if desired.

Frying: Cut UNCOOKED ham into slices no more than 1/8-inch thick, wash and trim off skin. Place in skillet with 1/8 cup water, parboil until water is gone. Cook slices over medium heat until slightly browned. (Avoid overcooking, as this will cause ham to become tough.) Frying tends to intensify the flavor of aged ham.