Skull Island Tiger Prawns (Penaeus esculentus and Penaeus semisulcatus), also referred to as Skullies are caught in the Gulf of Carpentaria and are the biggest prawns in Australia.  These prawns are harvested by a fleet of ten prawn trawlers with a crew of 5-7 per boat that operate off the north coast of Australia.  These prawn trawlers range between 22m and 25m in length.  This fishery is MSC Certified Sustainable and the first ever fishery to be government certified under a Carbon Neutral Program.  The fishery was established in the late 1960’s and is Australia’s most valuable fishery managed by the Australian Commonwealth Government.  The fishermen are members of the Northern Prawn Fishery Management Advisory Committee (NORMAC), which is an advisory body to the Australian Fisheries Management Authority (AFMA).  NORMAC is dedicated to maintaining the sustainability of the Northern Prawn Fishery and has a strong history in the area of responsible and pro-active action in fisheries management.

Bycatch Reduction Devices including Turtle Excluder Devices are on all prawn trawlers operating in the Northern Prawn Fishery. Other larger marine species such as stingrays and sharks, also benefit from the introduction of these devices (See the video below).  The video was produced with netmaker in Cairns, Neville, in conjunction with WWF – showing some of the steps that have been taken to reduce any unnecessary bycatch.

The prawn trawlers are fully refrigerated for at-sea processing, which results in a premium quality, sustainable Australian prawn product. The combination of technologically advanced equipment and skilled crews can grade, pack and freeze the product on board within 6 hours of harvest.  The skilled crews catch, grade, pack and processing the catch at sea under strict supervision to meet world seafood quality standards.

Australia’s Northern Prawn Fishery (NPF) is often referred to as Australia’s last ‘wild frontier’, across Australia’s top end. The fishery extends from the low water mark to the outer edge of the Australian fishing zone. Its eastern extremity lies at Cape York in Queensland and stretches west to Cape Londonderry in Western Australia. 52 vessels are licensed to operate in the MSC certified Northern Prawn Fishery, which covers approximately 880,000 square kilometers. Less than 12% of this area is fished.  The fishery has undergone great transformation over the years.  It has gone from a 312 vessel fishery in the early 1980’s, to currently a 52 boat fishery that operate in an area the size of New South Wales. This equates to a very small footprint and a sustainable, efficient fishery that produces a high-quality prawn.

Skull Island Tiger Prawns are truly the king of the plate due to their sheer size and striking characteristic tiger stripes.  These whole, head-on raw shrimp are semi-IQF U-6 prawns carefully packed by hand into a 6.6 pound box. 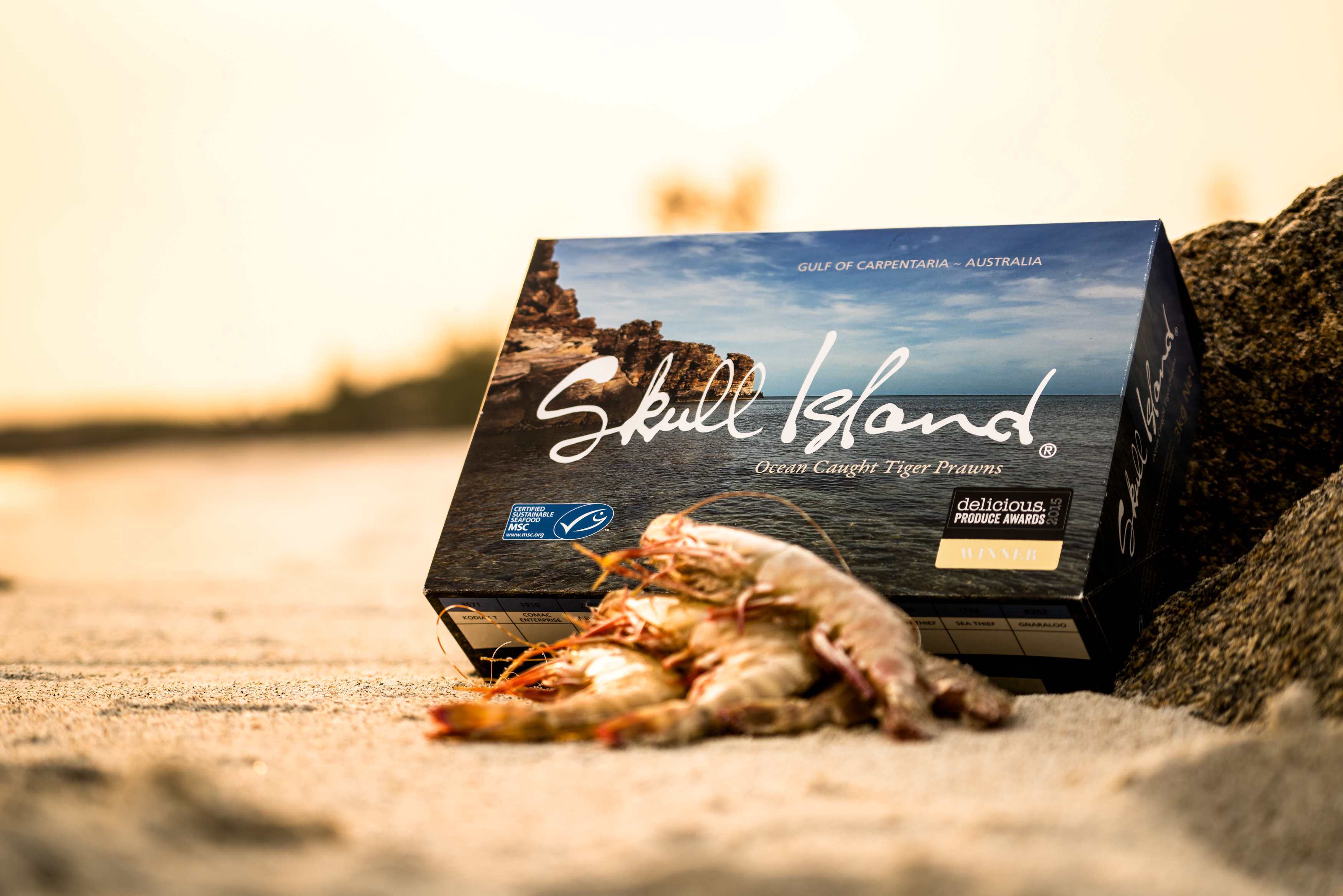